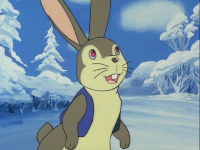 The young woodchuck Rocky (Johnny in the books) leaves the nest to build a home of his own in the distant Green Forest. There, he meets a pretty girl woodchuck called Polly, and other characters like: curious Peter Rabbit, who is always scared easily, gossipy Sammy Jay, Chatterer the Red Squirrel, who is the forest prankster, wise Old Grandfather Frog, and many others like Bobby Raccoon, Jimmy Skunk, Buster Bear and Uncle Billy Possum. All strive to live in harmony and to avoid dangerous enemies like Reddy Fox, Mean Weasel, hawks or man. Fables of the Green Forest is an adaptation of several children’s books about animals, written mostly between 1910 and 1920 by American writer Thornton W. Burgess. The stories in these books were inspired by the writer’s own childhood in Massachusetts, where he grew up surrounded by nature and wildlife. This environment induced a conservationist spirit in the author, that is felt througout his works, which were meant to both entertain as well as educate about the natural world that surrounds us. This love for nature is also very much present in the anime and the tone is quite similar. Noteworthy are the naturalistic descriptions of animal behavior (an example of this is the episode “Paddy Builds a Dream House” about the building skills of Paddy Beaver), the sense of community, the beautiful colors, and the lovely background music.